The 2020 presidential candidates have debated a wide gamut of issues, ranging from health care, to immigration, to impeachment proceedings. While many of these issues are critical to the day-to-day lives of the American people, there are several other key concerns — like infrastructure, climate change, and gun violence — that are of central importance to mayors and American cities. We asked mayors what issue related to cities they hoped would get talked about during the 2020 election cycle: an overwhelming 45 percent said infrastructure. This was the most popular answer by 30 percentage points. The level of consensus on this open-ended question is striking. Other frequently cited issues were housing affordability (15 percent) and climate change (11 percent), though their popularity as responses paled in comparison with infrastructure. Infrastructure has long stood out as an important issue on the Menino Survey of Mayors. In 2015, we asked mayors “What one trend or issue that should be a state or federal matter will pose the biggest challenge to your cities?” Infrastructure was also the most popular response, by a margin of over 30 percentage points.

Figure 2: Biggest Issues for 2020 Election Thinking ahead to the 2020 election, what is the single biggest issue related to cities that you hope gets talked about? 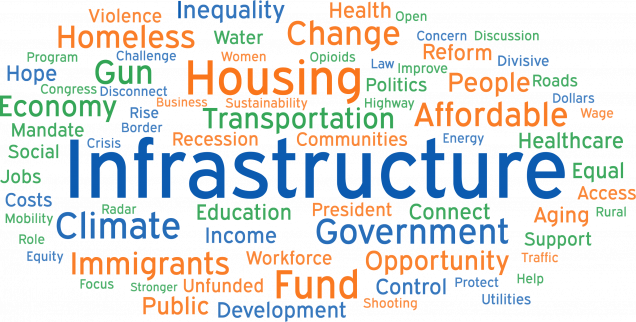 Mayors are responsible for much of the physical infrastructure on which our daily lives depend. Reflecting its importance to mayors and city residents, we devoted an extensive survey module to understanding mayors’ infrastructure priorities and challenges. Two-thirds of mayors highlighted roads as one of their top three infrastructure priorities. Water, wastewater, and stormwater (51 percent) and mass transit (43 percent) are also priorities for substantial numbers of mayors. These findings are remarkably similar to those in 2015 when we asked the same question. One notable exception, however, is water, wastewater, and stormwater: mayors were 10 percentage points more likely to underscore those issues in 2019 compared to 2015. This increase may reflect federal legislative changes, which have expanded the waterways that cities have to treat. It likely also indicates the growing salience of these issues, as extreme weather events such as flooding are becoming more common. In a recent climate study, three quarters of US cities reported that heavy rain events or inland flooding had increased in intensity, frequency, or location in just the last five years.1

Figure 3: Top 3 Infrastructure Priorities Thinking about infrastructure in and around your city, what are the top three areas you would prioritize if you could allocate a significant amount of new money? 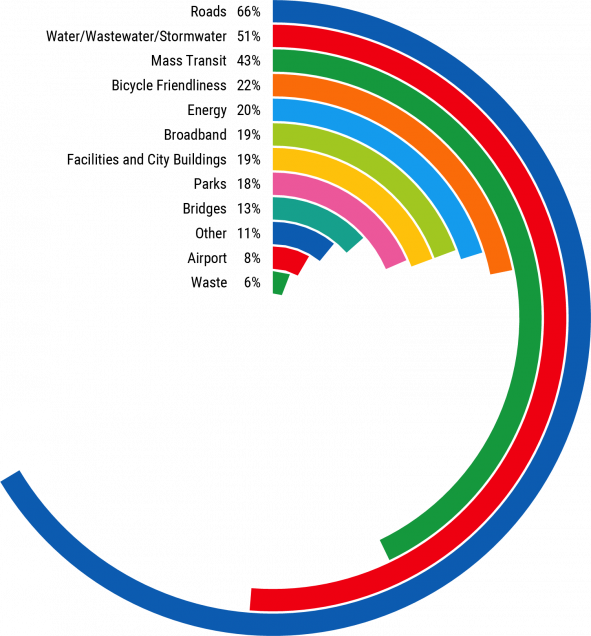 We also asked mayors, in an open-ended question, what specific infrastructure projects they would pursue if given a large or small unrestricted grant. Starting with large grants, a plurality of mayors (25 percent) cited water, wastewater, and stormwater projects. This is a modest increase (seven percentage points) compared with 2015. A number of mayors worried about aging water infrastructure; one mayor succinctly described these concerns: “Stormwater runoff. In the last ten days, we’ve seen two 100 year storms and one 500 year storm. People are being flooded like we haven’t seen before.” A southwestern mayor underscored the importance of water regionally, noting that his top project would be: “Water reuse facilities. The southwest of the country is in need of thinking about the future and finding ways to conserve water.” Largely, though, the responses are fairly similar across the four-year time-span; mayors’ needs remain the same and are largely unmet. Other popular answers in 2019 include mass transit (19 percent), roads (16 percent), and facilities and city buildings (13 percent). 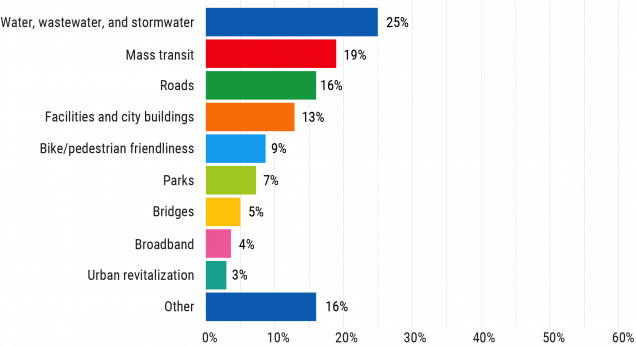 Turning to small grants, a plurality of mayors (25 percent) would allocate these resources towards facilities and city buildings, such as building or refurbishing city hall, public safety buildings, or community sports complexes. This represents an increase of 10 percentage points compared with 2015. Other popular responses include bicycle/pedestrian friendliness (19 percent), roads (18 percent), and parks (15 percent). 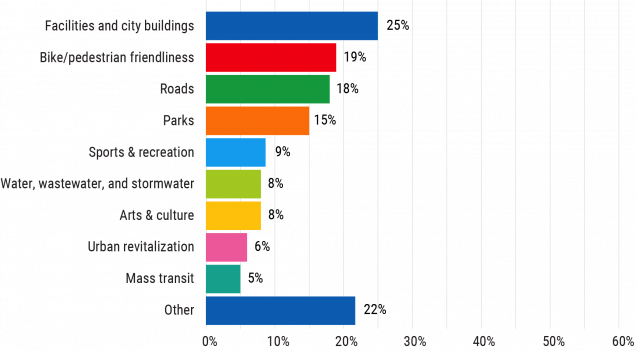